Financing of the Palace Facades

The Palace Façades will be Exclusively Financed by Donations.

The excess cost of the Palace compared with that of a structure of the same size configured in today’s architectural style is around 105 million Euros. This estimate for the construction of the historic baroque façades, including those of the Schlüter Courtyard, is based on a cost estimate that has been confirmed through further calculations by a working group employed by the state conservator of Bavaria working together with a planning bureau. 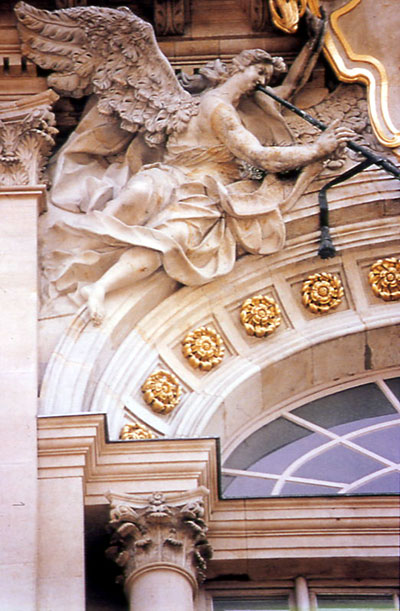 Why are the historic Palace Facades more expensive?

The excess cost arises because the handwork necessary for the façades is more time consuming, and thus more expensive, than industrially produced modern façade elements. The beauty of the Palace façades was derived from their lively quality; they had the effect of a huge sculpture. The artistic and handmade carrying out of the plans by Schlüter and Eosander upon which hundreds of stone masons and sculptors worked between 1699 and 1716 caused each detail to become an individual sculpture in itself done in the manner of the particular artist who worked upon it. Famous sculptors like Permoser, the master of the Dresden Zwinger, created the sculptures. So for example, the allegory of the four seasons in the form of herms under the balconies of Portal IV and V on the façade facing the Pleasure Garden are ascribed to him. Marvel at the strength of expression of the statues of autumn and winter which were saved and now decorate the Palace Portal built in to the State Council building. The ones of spring and summer were rescued after the demolition of the Palace but were damaged. They can be restored and now await their remounting in the new Palace. 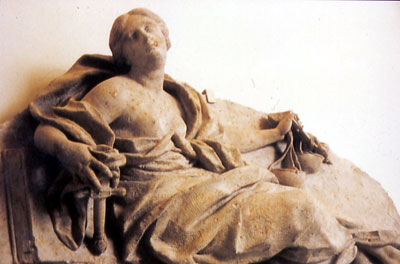 Many  Items have been Saved

Approximately seventy percent of the figurative sculptures from the Palace’s exterior still exist. Nevertheless, the stones of the cornices, windows, columns, and capitals were largely lost and only fragments are to be found in the storerooms of the museums and government offices. Copying them is relatively simple. To be sure, the original blue prints have been missing since the departure of Schlüter and Eosander in 1713. But the Palace is nonetheless outstandingly documented with thousands of detailed and overall views and with hundreds of plans from prior restorations. The preserved original remains of the Palace add additional information about the way artists and hand workers worked the sandstone. 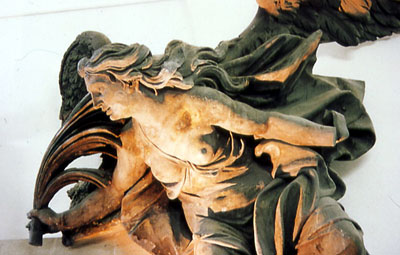 Two disposal sites are to be dug up in an archeological manner to search for Palace remains since her there is a high degree of certainty that valuable fragments can be found.

The Friedrichshain bunker complex received a layer of rubble from the demolition debris of the Palace façades in late autumn of 1950 immediately prior to the delivery of 15 centimeters of topsoil. Thus, here Palace material lies just below the surface. Also, on the industrial site of the former VEB civil engineering firm in Berlin-Heinersdorf  fragments removed from the Palace were stored until into the 1960s. These had been saved by the scientific activities of  Prof. Strauss prior to the demolition. At that time, the government of the German Democratic Republic had attempted to silence the protests against the demolition of the Palace in this way. Walter Ulbricht promised to rebuild the Palace in another location when the economic situation improved. For this reason a large number of building elements were saved and stored in Heinersdorf. However, after the construction of the State Council Building with the incorporation of Portal IV, the Palace was finally forgotten.

The stored spoils, together with other rubble, were dumped into a stream ravine lying in the immediate vicinity of their former storage area, in order to create a new industrial site. And thus it happened that a capital of one of the columns of a round-headed window in the Parade Floor, like, for example, those to be found on the main portico of  the Schlüter Courtyard, was dug up again in 1992 during the strengthening of the foundation of  a huge cement mixing plant. 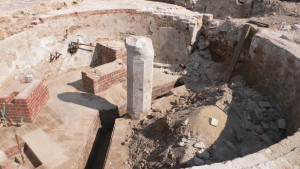 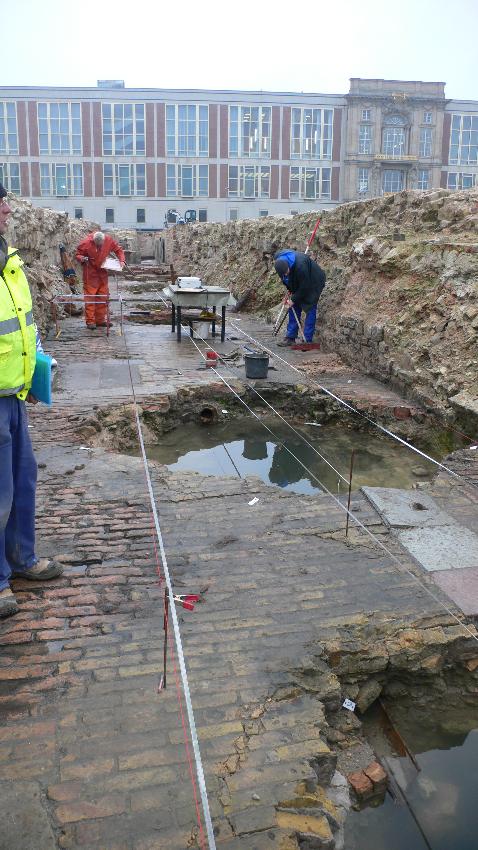 Floor in the Cellar under Portail III, with craters of dynmiting the Palace 1950

In 2009 there have taken place sussessful excavations also on Schlossplatz. The ancient cellars of the Palace show now the whole drama of the demolition of the builöding. Many of them may be saved by integration into the new building.

Naturally, one could fabricate repetitive details of the façades using poured cement. However, then every piece would be completely identical to others of the same kind. It is exactly the small inaccuracies and differences in the work of the various artists and handworkers, however, that bring about the liveliness of the façades and create the beauty of the Palace. For this reason the Palace exterior must be reproduced with the same methods and skills as those used 300 years ago. 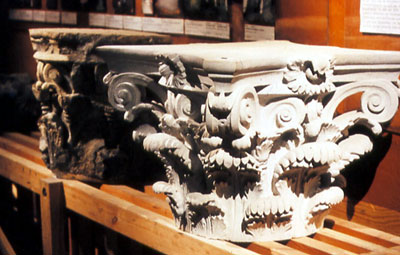 Fragment of a Corinthian capital (see also NEWS) and its copy made with the help of photo documentation. Such capitals were to be found in the Parade Floor crowning the inset columns of the round-headed windows on almost all of the portals.

The Construction Shack and the Information Center

There will  be a construction shack in Berlin for the reconstruction of façade elements, following the example of the Dresden Frauenkirche It will be located  in Berlin-Spndau. The construction shack will be open to the public. They will be able to observe the artists and handworkers at work.
The finished stones, which can be donated will be in combination with the name of the donator for ever.

The Humboldt-Box with Exhibition rooms and a museum shop, in which  the public can buy Palace items like watches, videos, coins, T-shirts, books and much more, will open in December 2010 on Schlossplatz in the Center of Berlin close to the coming Building.  Both the construction shack and later the construction site itself will become a magnet for the public just as the construction site of the Potsdamer Platz with its “Red Box” did a few years ago. Where else can one see how a palace is rebuilt in the old handmade manner?

You will note that all this costs a great deal of money.We want to collect these funds through a great national effort using tax-favored donations. The readiness of many citizens to help us is great.  But this help does not depend on giving large sums. Every donation counts.

If, for example, during the next ten years 8 million donors out of the 80 million Germans can be found and each gave only 10 Euros , we would have enough. If every donor were to give as much as 40 Euros yearly, only 200,000 citizens would be needed!