Financing of the Humboldt Forum

The Commission for Berlin’s Historic Center developed a comprehensive financing plan for the “core structure” which was approved by the Bundestag in that form. Here are excerpts describing the most important details:

The realization of the Commission’s proposals regarding architecture and use will become an important factor in Berlin’s economy. Not only will the whole economic level of this city area be noticeably raised (with economic effects on all its surroundings), but also additional high value events will be brought into the city through the use of the Agora upon which Berlin, like other capitals, is economically strongly dependent.

The entire Palace structure will not be financed solely by donations. For that resource, the construction costs are too high. We calculate them at 670 million Euros in total, not counting the cost of the land. Nevertheless, the assumption that the excess cost of the Palace façades in the sum of 80 million Euros can be financed by donations is realistic as proven by the success of the collection effort for the rebuilding of the Frauenkirche in Dresden.

The Core Structure is an Investment

Behind the façades there will arise a very large building with a volume of approximately 160,000 square meters of gross floor space. The price will be around 590 million Euros.This calculation is serious: The new Chancellery in the bend of the Spree River is an ambitious, high value building with a volume half as large as the Palace. In the final calculation, it was basically half as costly, around 265 million Euros. In the Palace figures there are reserves included. The actual construction costs will be determined only once the invitational construction competition is held. This can be finished in the autumn of 2005. 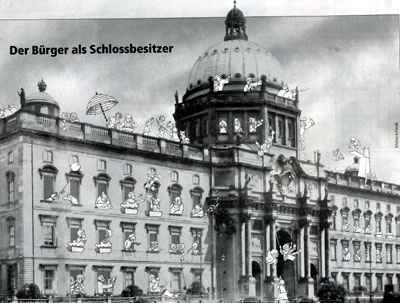 Stock Distribution not before 2006

Before then there can be no offering to subscribe for shares in the Palace. The campaign of the Union for the Berlin City Palace during the autumn of 2001 in which options for the later purchase of stock could be subscribed was a heartening test run. Of the 8,000 persons who were written to, almost 2,000 answered despite the stock market fall and they opted for around 4 million Euros. Expanding this result to the entire population of Germany, it appears that there are sufficient potential buyers available.

By itself, the state cannot finance this building. The lack of funds for the government budget is known to be very large. For this reason a private/public stock corporation for the financing of the core structure is to be founded, namely, The Palace Inc. The Palace Inc. will acquire about 360 million Euros in the private capital market. 230 million Euros, not including the contribution in kind of the land parcel, will be assumed by the government. In this way we will achieve a situation wherein both the citizens and the state should and can be involved in this unique project. The readiness of many private persons to due their civic duty is already present.

Despite the deficit situation of the government budget, the government is assured of counter-financing for its contribution. Alone in Dahlem, according to information from the Foundation for Prussian Cultural Possessions, 200 million Euros must be spent in the next ten years to fundamentally refurbish the buildings of the Ethnological Museums which stem from the 1950s in order to not endanger the collections. This sum will now be switched over to the Palace Square. After the museums are moved, the very valuable parcel of land in Dahlem will be free. Its sale would bring in additional funds.

Since the state will not relinquish the final decision making authority especially with respect to the use of the Palace by third parties, the state’s power will be ensured through the division of the stock into two classes, one class with voting rights in the hands of the government, and one class of preferred stock without voting rights but with a guaranteed dividend right in the hands of private and institutional investors.

After contacting a major German bank, it appears possible to attract institutional investors for the project, i.e. the Palace and only the Palace, on the order of 250 to 300 million Euros to the extent that a dividend of 2 v.H. is guaranteed in order to insure the value of the stock .

It is proposed that the government relinquish its rights to dividends. Thus the receipts from the Agora, the restaurants and the other businesses in connection with the use of the commercial establishments in the Palace will be exclusively for the benefit of the preferred stockholders. In order to ensure the success of the Agora,  the Palace corporation will pursue a world wide marketing approach in cooperation with international partners after the example of the management corporation of the Vienna Hofburg Palace which provides for total occupancy there.

The Total Financing Package at a Glance

The construction costs, which total altogether 670 million Euros, will be financed as follows:

The founding capital of the stock corporation after distribution of all shares: