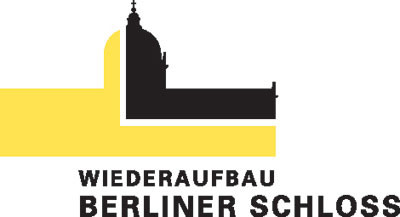 On February 23, 2003 the Rules of the Förderverein (the “Verein”) were unanimously (with one abstention) changed at a meeting of the members in connection with the exhibition entitled “The Importance of the Berlin City Palace for the Center of Berlin – a Documentary e.V.”  (in short form in the media: “Förderverein Berliner Stadtschloss”).[1] At the request of the Finance Bureau for Corporations I Berlin,  certain points in § 2 and § 14 of the amended Rules were clarified. These changes were presented to the above-mentioned membership meeting for a vote and were decided upon.

With these actions, the Rules were switched over to the rebuilding of the Berlin Palace. [2]The Verein’s name was also changed. The name “”Stadtschloss”, or  “City Palace” stemmed from the period of the partition of Berlin in order to make clear to visitors that, in addition to Charlottenburg Palace,  there had previously also been a main palace, situated in East Berlin that had been demolished by the authorities of the German Democratic Republic in 1950. Historically, however, that palace had always been known as the “Royal Palace of Berlin”, or  simply  the “Berlin Palace”.  This latter name is now used in the title of the Verein.

The amended Rules were recorded on November 12, 2004 at the district court for Charlottenburg.

The Verein shall have the name:

and has been  recorded in the Organization Registry of the Charlottenburg District Court under Nr. 12716 since August 27, 1992.

The Verein has its place of residence in Berlin. Its business year is the calendar year.

§ 2 Purpose of the Verein, Charitable Status

The purpose of the Verein is the promotion of the rebuilding of the Berlin Palace, its facades and courtyards as well as its important historical interior rooms to the maximum extent possible true to the original, for educational and cultural purposes.

In view of the importance and meaning which  the Berlin Palace possessed:

• as an artistic and architectural monument,

• as a masterpiece of the hand wrought artistic baroque architecture,

• as the chief work of Andreas Schlüter and other famous architects,

historic cityscape of Berlin before its destruction

and which in people’s memory it still possesses,  the rebuilding [of the Palace] is a matter of high national and international cultural rank. The Verein views the thoroughgoing reconstruction of the Palace, who’s dynamiting  and demolition became a symbol of the communist dictatorship,   as simultaneously a symbol of the regained German unity and the ability of the democracy to rebuild and pass on to posterity culturally historic buildings.

The promotion of education and culture is closely tied to the future use of the Berlin Palace as, among other things,  a center of museums, culture and exhibitions.

The task of the Verein is the obtaining of financial resources, especially the solicitation of donations and their use for the specific purpose of the planning and carrying out of above-mentioned reconstruction of the Berlin Palace.

Necessary expenditures for the solicitation of donations for public relations and advertising, as well as the putting on of exhibitions on the subject of Berlin’s city center, are included in the tasks permitted by the Rules of the Verein. The Verein acts without self-interest and does not seek any economic gains for itself but rather exclusively charitable ends in the sense of  § § 51 et seq. of the BGB[3] Tax Regulations. The assets of the Verein may only be used for purposes permitted under the Rules. The members receive no sums from the assets of the Verein over and above the repayment of expenditures [in behalf of the Verein].

No person may benefit from expenditures which are not in accord with the puposes of the Verein or through unreasonable reimbursements.

Every adult person and every organization both domestic and foreign can become full members. The Board decides upon the written application for membership. A denial must state the reasons. The person applying may, within one month of the decision of the Board, hand in objections to the denial. The next members meeting makes the decision about the objections.

People on whom the Verein wishes to confer deep respect and thanks for exceptional services in furtherance of the Vereins goals can be elected by the members meeting, at the proposal of the Board, to be honorary members.

• by being struck from the membership roles;

• by expulsion from the Verein.

Voluntary resignation is accomplished by written notice to a Board member and is only valid at the end of a calendar year upon a termination notice period of three months.

A member can be stricken from the membership roles upon the decision of the Board, if after being twice warned the member remains in arrears with respect to the payment of his contribution.  Striking from the roles can not occur prior to three months following the sending of the second written warning without the contributions being paid. The member shall be informed of the striking.

A member can be expelled from the Verein at the decision of the Board if the member has acted grossly counter to the Vereins interests. Prior to the decision, the member shall be given the opportunity  within a suitable time period to justify his actions before the Board, either orally or in writing. Written explanations by the affected member shall be read before the Board. An expulsion decision shall be accompanied by the reasons therefor and shall be sent in a registered letter to the member. A member shall have the right to appeal an expulsion decision to the members meeting. An appeal shall suspend the effect of the expulsion during its pendantcy. The appeal must be delivered in writing to the Board within three months following the expulsion decision. The next following members’ meeting shall deal with and decided upon the appeal.

Contributions will be raised from the members. The amount and due date thereof shall be determined by the members meeting.

§ 5 Organizational Components of the Verein

The components of the Verein are:

• Acceptance of the annual and financial reports as well as the approval and release of the Board;

• Election and recall of Board members;

• Determination of the size and due dates of members contributions;

• Decisions about complaints against denials of membership or

• Appeals against expulsion decisions of the Board;

• Determinations concerning changes to the Rules

The members meeting can decide on suggestions to the Board in matters that fall under the area of the Board’s responsibility.

The Board for its part can obtain the opinion of the members meeting in matters covered by its area of responsibility.

§ 7 Calling of a Members Meeting

A meeting of the members must take place at least once each year. It is called by the Board on at least two weeks written notice giving the order of business for the meeting. The notice period begins with the date of the postmark  on the invitation notice. The notice is deemed to have gone to the member if it is addressed to the latest address furnished by the member to the Verein in writing.

§ 8 Order of Business of a Members Meeting

The order of business of the members meeting shall be determined by the Board and sent to the members in the notice of meeting.

In regard to requests to enlarge the order of business which are brought up for the first time at the meeting, the meeting itself shall decide. For acceptance, a majority of Ÿ of the valid given votes is required.

§ 9 Resolutions of the Members Meeting

A members meeting is only able to pass resolutions when it is under the direction of the Chairman, one of the deputy Chairmen or another member of the Board. In the case of elections to the Board, the direction of the meeting can be handed over to an Election Committee for the period of the election and the ongoing  discussions.

The members meeting is capable of passing resolutions whenever at least one quarter of the full members are present. In the event that a quorum is not present, the Board must call a new members meeting within 4 weeks with the same order of business. This new meeting shall be deemed to have an adequate quorum regardless of the number of members who attend.

A duly called members meeting is also able to pass resolutions if, upon the express inquiry of the Chairman recorded in the minutes, no member present questions  the  quorum requirements. Member meetings take decisions by a simple majority of the cast votes. Abstentions are not recognized.

The Verein shall be represented legally and in non-legal matters by the Chairman or one of the two deputy Chairmen. The Treasurer or the Secretary can only represent the Verein together with another member of the Board.

The members of the Board shall serve without compensation. The shall have the right to claim compensation for necessary costs incurred.

§ 11 Responsibilities of the Board

The Board shall direct the business of the Verein and shall represent it in public.

In particular, it shall have the following duties:

• the carrying out of the Verein’s purposes;

• the management of the Verein’s assets;

• the establishment of a budget;

• the employment of a business manager and the oversight of the management of the business;

• the taking of decisions regarding the acceptance, the striking from the rolls and the expulsion of members;

• the preparation for, and the calling and conducting of, member meetings;

• the carrying out of decisions of the members meetings;

• the appointment of the finance committee (§ 14).

§ Meetings of the Board

Meetings of the Board shall be called in writing or by telephone or telegraph by the Chairman, or when he is prevented from acting, by one of the deputy Chairmen. Normally, two weeks prior notice shall be given.

It is not necessary to communicate the order of business. A meeting of the Board shall be conducted by the Chairman, or in the event of his inability to act, by one of the Deputy Chairmen. The meeting shall be capable of action if a quorum consisting of at least a majority of the Board members, including the Chairman or one of the Deputy Chairman is present.

The Board shall take decisions by a simple majority of those present. In cases of a tie vote, the vote of the member conducting the meeting shall decide the question.

A Board decision can also be taken in writing or telephonically if all members of the Board unanimously agree to the action under consideration.

The decisions of the Board shall be evidenced by entering them in a book of resolutions which shall be signed by the conductor of the meeting. The entry shall contain the place and date of the Board meeting, the names of the participants, the decisions taken and the results of the voting.

§ 13 Management of the Business

§ 14 Dissolution of the Verein

The Verein shall be dissolved after it has fulfilled its purposes set forth in the Rules, or if the members’ meeting shall so decide by a majority of Ÿ of the valid votes cast.

After the completion thereof, the assets shall be placed at the disposal of the Foundation for Prussian Palaces and Gardens, Berlin Brandenburg 14471 Potsdam, or its legal successor, which shall use them exclusively and directly for charitable purposes. This procedure applies also in the case of the discontinuance of tax favored status of the Verein.

[1] Translation = “Society for the Furtherance of the Berlin City Palace”.

[2] NOTE: Previously the Verein had only engaged in advocating the rebuilding of the Palace and not collected any donations therefor since the Federal Government had not given the necessary approvals for the project and consequently the Verein could not have accepted donations and donors would not have received tax benefits for their gifts.