Editorial – Welcome to the Berlin-Palace homepage in English! 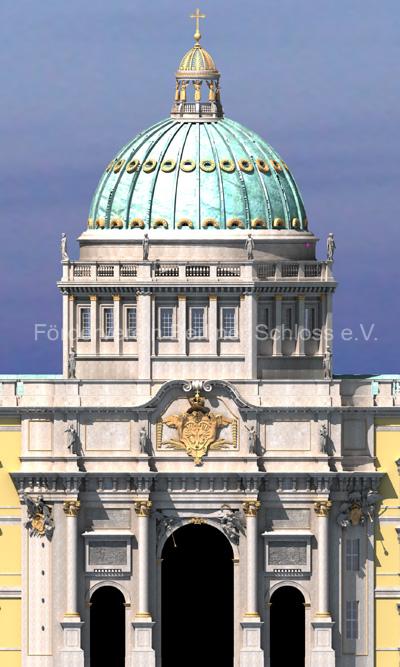 The Palace will be built!  Present status of the Project

The Berlin Palace will be rebuilt in its former beauty. To be sure, not in every detail as it once was but with the modern architecture of its new east facade – and thus in a manner also suitable for our times. This is what the German Bundestag has decided on a number of occasions and it is what the German government is now proceeding to make a reality.

The Italian Prof. Franco Stella was chosen as the first prize winner in an international architectural competition at the end of 2008. His plans carefully embody the parameters set by the German Bundestag. This fact was confirmed on December 2nd by the Superior State Court in Duesseldorf after the Federal Anti Cartel Office had declared the assignment of the contract to Stella to be invalid on account of a protest filed against the award. On December 30th, Stella received a new undisputed legal architectural contract. In the meantime the construction planning continued during the pendency of the legal proceeding so that no interruption occurred.

In 2009, the Federal government established the Foundation for the Berlin Palace- Humboldt Forum and in November it began its work under Manfred Rettig as business manager. It is a non-profit organization and is the long awaited partner to receive the tax exempt transfer of donations and for the receipt of the constructions plans and facade models and prototypes in sandstone we have created for the contractors.

From the exterior, the Palace will once again look as beautiful as before, with its baroque city facades and the Schlüterhof courtyard. The historic dome will also return, if the necessary money for its construction is obtained. With it, the Palace will again become the central architectural structure of the city. Nevertheless, it will acquire a modern east facade facing the river Spree and a simple modern west facade inside the Schlüterhof in place of the earlier facade of the transverse building from 1873 which was done in an obtrusive neo renaissance style which poorly harmonized with Schlüter’s architecture.

In the interior it will be a modern building which nevertheless will enable future generations to also reconstruct significant series of rooms from the old Palace. Also Stella has planned for the partial reconstruction of three portals in the Eosander courtyard and the retention of the remains of the still existing Palace cellars as part of the new building.

Up to the spring of 2010, the general plans will be reworked and finished. In so doing, the retention of the overall cost limit of the Bundestag at 552 million Euros. will play a decisive role in the final release of the previously approved sums by the Budget Committee of the German Bundestag It will finally be determined to what extent this possible additional reconstruction work  can really be done for this amount.

Stella has expressed his idea of his personal relationship to the historic Palace as follows:

He considers himself to be acting as a “latter day fellow worker” with the two Palace master builders, Andreas Schlüter and Eosander von Goethe. It is his task,  at the behest of the Bundestag, to so configure the desired modern architecture that the work of these great artists is not harmed or overshadowed. Rather he is attempting to transform the classic Palace architecture in those locations where it is so desired into a modern architectural style. The historic architecture will retain its dominant position.

It is now estimated that the commencement of construction will be in early in 2011, and the completion of the main building will be in 2016, even if not all the facade elements will have been finished. These sections can in many cases be subsequently installed, just as was done in Schlueter’s time.

The Palace will restore the familiar picture of Berlin, complete the historic “Mitte” district, and heal the city’s appearance. It’s reconstruction will transform Berlin once more into the much loved “Athens on the Spree”. In this way a counterpoint will be established to the massive modern quarters which have arisen in the middle of the city. Berlin will also thereby become an architecturally exciting city. The modern must place itself in the context of the city history and allow itself to be measured against historic architecture, and it has to contend with such architecture if it does not want to become boring. The Palace will reconcile the inhabitants with the reconstruction of the city; each will find his or her architectural “homeland” in old/new Berlin. The Palace’s usage will point the way to the future and define anew through its mission the center of Berlin.

As the “Humboldt Forum” it will be in the service of arts and science, and together with the museums on the Museum Island, the Humboldt University and the library, become a unique place of world culture and science. Berlin is placing its very center at the service of the dialog of the peoples of the world during the age of globalization, a grand gesture with which Germany is acknowledging and involving itself as a part of the world community of peoples and their cultures. This “house in the service of all citizens”, with its myriad exhibitions, will become a place to experience things in the best tradition, a house in which the lights never go out, sophisticated and pleasant.

It will serve the political, cultural and social dialog and be a place for great experiences. Open to everyone, it will become the meeting place for all Berliners and the guests of the city. We would like to present this magnificent project to you on our website in all its details. If it inspires you, we would hope for your support in our collection of donations.

We look forward with pleasure to our dialog with you. Please use the guest book, the blog and also direct contact by email with us!

PS: We are sorry, not to be able to translate all items of our german homepage, especially those which are more interesting for German visitors to our website. Most international interesting items we have translated  into English. As there are many well informing pictures also in the other items, we propose to look at them too! Further translations will follow.

We are very grateful to our friend Raud Johnson, New Canaan, USA, who did a wonderful job to translate these items into English!